September 20, 2018
Yesterday a dear friend asked if I was interested in taking some veggies from their garden off her hands.  This is the first year in a long time that we haven't been able to cultivate our own garden because we were putting in an actual yard, so I jumped at the chance to snag fresh produce.  Can we take a second and offer a "hoorah" for generous souls that share their abundance? Seriously.  One of our new neighbors over here is more than eager to share his veggies with us.  He is the kindest older man, and even though he still hollers "Good morning, Amanda!" to me--I wave and reply "It's still Amber, Glen!"--I adore having him close.  He has brought over beets, beet greens, summer squash, green beans, winter squash... basically if you're going to help save my grocery budget so I can buy more crap off amazon prime, I'll let you call me whatever you want.  Wow... that derailed in a quick hurry, didn't it? Anyway...

When I picked up the veggies, I realized I almost had enough there to make a few batches of canned salsa.  A quick text to my mom for our secret recipe, a jaunt over to Pettingils for the remaining produce, picked up school carpool, and I was ready to get started.  I threw on my apron--which my mother in law mocks because she's super jealous that I'm such a domestic goddess-- and started prepping veggies.  I got about an hour in to this process and the circus exploded.  The kids were full crazy--was yesterday a full moon??--and I realized I had to prep dinner.  Like stat.  Tator tots instead of mashed potatoes it is! Thank goodness I had my freezer meal already going the crock pot! You're going to want to ask me about those.  Holy slice of heaven.

We had family dinner, and my kitchen was a hot mess.  I don't know about you, but my entire house feels clean if my kitchen is clean.  Likewise, if my kitchen is a disaster... you get it.  It was about at this exact moment that I lashed out at Larsen.  How dare he request chocolate milk! Now was clearly not the time.  I started doing the dishes, and realized it was time to blend the veggies that had been cooking for two and a half hours.  And then I remembered I don't own a blender.  Because... well... I'm a terrible adult.  Hand blender to the rescue!  Now to find the blade attachment... I hunted high and low until locating it in a bag on a shelf in my pantry.  As I reached to grab it, something bit me!  Ok I was actually sliced by a blade on my pico de gallo maker, but the shock factor was the same.  I take salsa very seriously over here, obviously--who owns a pico de gallo maker? Let's slice and dice that crap yourself, Amber. Honestly.  Anyway...I sliced the tip of my finger right off.  Perfect.  It's moments like these that I hate being the mom.  Like, hello.  Why is no one here to doctor me up? To listen to me whine? MOOOOMMM!!!  And then to add insult to injury I grabbed the rag off my counter to stop the bleeding.  The very rag, I realized real quick, I had just used to wipe off my counter.  You know.. the one where I was cutting jalapenos.  Super.  Bad words, bandaids, and a beverage, and I was ready to get back to work.

I was successful in my attempt at blending a double batch of salsa with a hand blender, but I wouldn't recommend it, and over the course of the next several hours that salsa was bottled, bathed, cooled, and set up in an orderly fashion in my pantry.  All while bathing kids, getting them in jammies--including the preschool class pet, which makes me want to gag whenever we get it because...other people's houses!--and cheering Dewy on while he spread gravel out back.  I even think the kids brushed their teeth.  Winning. 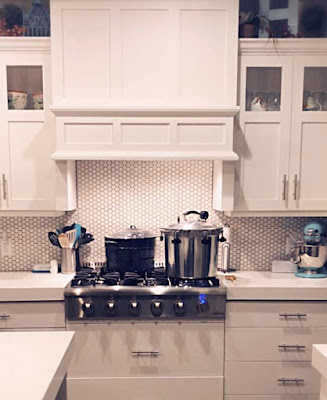 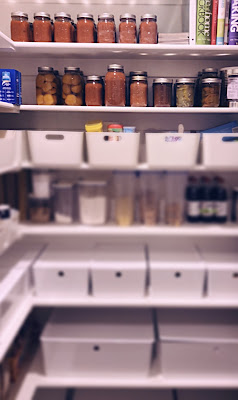