that time i almost bought an asian

Last weekend was life changing.  Well... not really, but it WAS super fun.  Friday morning I got Rhett to school, Baylor to the doctor, my chores all done, and I left the premises.  I had the car to myself--which meant no listening to the movie Trolls--and finished up an audio book while I drove to the cabin.  Aside from it being freezing upon arrival, I spent the later morning and early afternoon in utter bliss.  Do you ever just want to be alone? Like no other human interactions whatsoever? I love people, but sometimes I just want to lock myself in a closet and not talk to, look at, or touch another person for a minute.  No three year olds playing with my hair.  No babies sitting on my feet.  No seven year olds--and their sweaty grossness--yanking on my arm.  Mama is in time out, people.  I started dinner, went on a trail-ish-run, and after a couple hours welcomed one of my besties to the cabin.  It was the perfect amount of alone time.  Marcia unpacked, and we grabbed a snack.  Then it was time to binge watch Friends, take a nap, and await the arrival of our hunter husbands.

Saturday morning we sent the men back to the mountain, and we made our way to Park City to meet up with another hunter widow and bestie, Heather.  Stop number one: pedicures.  Now, I get pedicures pretty regularly because I'm high maintenance, and I'm here to tell you that this was literally the best pedicure I've ever had.  The woman was a dream come true.  45 minutes into my foot massage--thats right, not even the nail care portion of my pedicure was counted in that 45 minutes--I asked her how she felt about coming home with me.  The sweet Asian lady replied that she felt good about it once I promised  that I was a good cook.  She obviously didn't take me seriously, and I felt like pushing the issue would get me flagged for human trafficking. 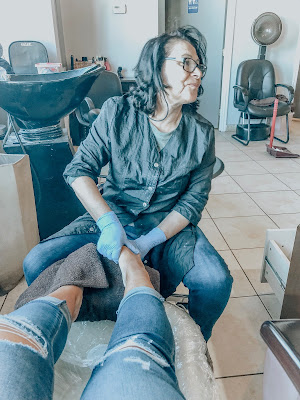 We went to lunch--me wearing my foam flip flops from the salon shamelessly--and then hit up the outlets.  I am perfectly ok with admitting that we caused some damage during our shopping escapades.  I would also like to issue a formal apology to Zac at the VANS store and Alex at Under Armour for our shenanigans they had to endure.  Let it be known that both were champs about it.  A pit stop at Coldstone for ice cream--Marcia got in touch with her inner child there--and we were headed back to the cabin for the night.  When the men arrived, Dewy asked me how much I spent.  His concern was valid, but I replied that, "I didn't spend nearly as much as I could have! I almost bought an Asian!" and the look of sheer horror was enough to deter the conversation to other topics.  More food, Friends episodes, laughing, and sleep, and before we knew it reality slapped us right in the face.  I was back to getting sippy cups of chocolate milk, coloring supplies, laundry, and baths, but for a brief moment I forgot all those existed. 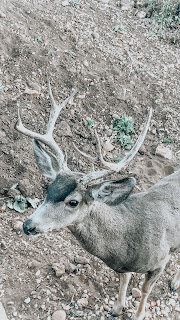 As a random side note, the men did not shoot anything.  I'm not even sure I believe the story that one of them did see some.  It should be known however that all weekend I was feeding this guy and his ladies off the back deck at the cabin.