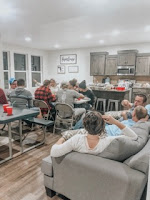 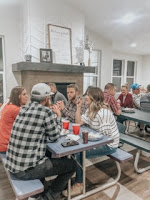 According to Jen Sincero, the energy you put into the universe will come back to you.  So the way I see it, the reason I always find awesome humans everywhere I go is because I'm awesome.  Right? One of the hardest parts of moving from our first home was the people we left behind.  I can honestly say that coming to terms with the idea of not seeing my neighbors every day is what took us so long to list the house.  We were sure there was never going to be another group like them.  How could there be? Now, let's be clear that our Harrisville posse has NOT been replaced.  However, we've landed a North Ogden tribe and we are growing rather fond of them.  We have been having iron chef competitions among these new friends, and this weekend we did a Friendsgiving with the competition being pie.  I was obviously a shoe in for champion, so I figured I would show you how I work my pie magic! 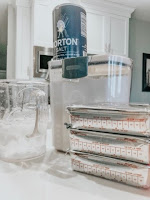 Making pie is an art form, and before you can begin you have to prepare accordingly.  That means that step one is to clean the kitchen.  Make sure the dishwasher is empty--you'll thank me later--,counters are clean, sink is free...you get it.  Next, grab all the ingredients, get your blue tooth speaker cranked, and roll up your sleeves.  If you are anyone besides my mother in law, throw on your apron--she is morally opposed to those--cause it's about to get crazy. 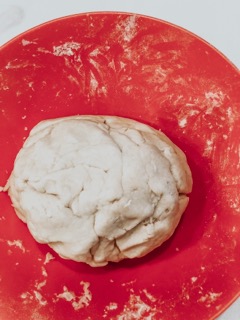 Tip number one: Have your mom on speed dial.  My mom makes miraculous pies, and all the pies I make are stolen from her recipes.  Tip two: Use the butter flavored Crisco blocks.  They are premeasured and easy to use.  The crust is made from unbleached flour, crisco, salt, and ice cold water.  Like literally water that has ice cubes.  Throw it all together, and mix it with your hands.  That is why the playlist is crucial.  Mixing this stuff can turn into quite the workout, and the apron is because it tends to get a little wild. My recipe made three whole pies and a pie shell, and since I was going for the win here I chose to make razzleberry pie.  NOT TO BE CONFUSED WITH RASPBERRY.  Every time I make mention of this kind of pie it's the same conversation.

"Razzleberry pie is my favorite."

"No.  If I meant raspberry I would have said raspberry."

"Well, what the heck is razzleberry?" 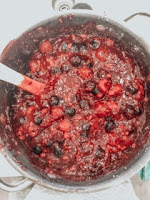 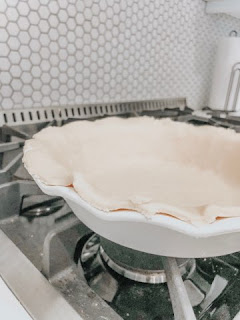 Once the dough is mixed, flour the counter top and use a rolling pin to roll out a chunk that will serve as the bottom.  It is easiest to place the shell in the dish by folding the rolled out slab in half, setting it in the dish, then unfolding it, but if you like to live dangerously go ahead and do it however you want.  Once I have all the shells in, I make the filling and let the oven preheat.  Today, this is about when everything went to crap.  As I was stirring the corn starch into the filling, the mixture started to boil a bit.  A slight bubble erupted, and splashed filling the temperature of molten lava onto my forearm. 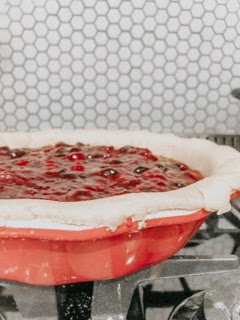 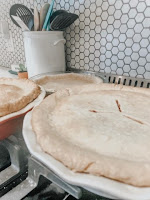 I immediately jerked my arm back, you know... the one holding the whisk, and launched the portion of filling that was stuck inside the whisk across the kitchen.  Floor, counter, cabinet... it spattered E.V.E.R.Y.W.H.E.R.E!  So there I was in the midst of a real life crisis... swear about the pain in my arm or rush to clean the berry filling off my white cabinets? I mastered some weird combination of both, and in so doing burnt the filling.  This, friends, is why I made sure to buy double of everything I needed.  Except, of course, the corn starch. This is also the part where you're trying to figure out why I am qualified to teach anyone about anything, especially pie making, when I'm obviously a clown.  I immediately marco polo-ed one friend, text another, and called a third in search of my missing ingredient because I am needy and dramatic.  Don't worry... they ALL pulled through and suddenly I was swimming in the stuff.  Had the cops shown up, I would have been arrested for dealing cocaine.  Rest assured that round two went much smoother, and no cabinets were harmed in the making of my pies. 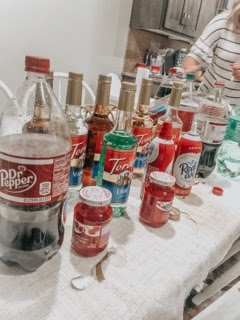 Next, I scooped the filling into the pies, placed the top of the shell on using the same method as I did the base, and cut three lines in the center for venting.  Brush a little milk across the top and sprinkle some sugar and Ba-Bam! you are ready to bake.  Spend the hour it takes to bake the pies loading and running the dishwasher, sweeping and mopping the floor, and cleaning off the counters/walls and you're all set for the party.  You should all be jealous that you didn't get to taste this, and you should also be aware that I totally won the contest.  #hodgesforthewin2018  You should also be aware that Kelly wins the real MVP for the make shift fiiz bar.  Us North Ogden senior millennials--you know because we were born in the 80's so we just barely made the cut and therefore are considered "elder"--really know how to have a good time.