you're welcome boy scouts of america.

November 13, 2018
When you are as big of a deal as the Hodges, you get invited to special events.  I'm not going to tell you who is the cooler Hodges that landed the invite... ok, fine... it was Dewy.  All these events are because of Dewy.  He is awesome at what he does, and I get to attend fancy evenings because of it.  Saturday was a benefit dinner and silent auction fundraiser for the Boy Scouts of America, and we went ahead and graced everyone with our presence. 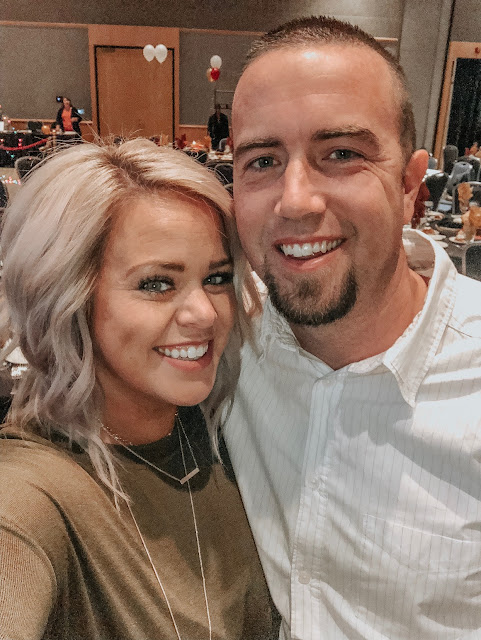 Years ago, when we were invited to our first event, neither of us had participated in a formal silent auction.  Now, I am obviously the spender of the family, and when Dewy is left to his own devices he cannot be trusted.  He is a saver, so spending money is not his area of expertise like it is mine.  On that night, he thought it would be a good idea to place the minimum bid on any item he deemed interesting and see what happened.  Rookie mistake.  Two car loads of crap and a ton of money later, we ended our evening.  I thought Dewy was going to have a stroke when they announced the auction had ended, and he saw all the things he had won.  Poor guy.  Needless to say, we get invited to a lot of these events now.  Apparently the word got around that the Hodges have deep pockets and generous hearts...neither of which are true. 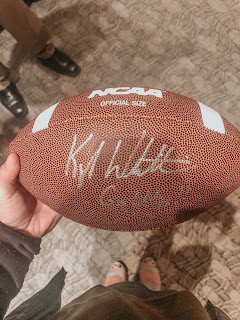 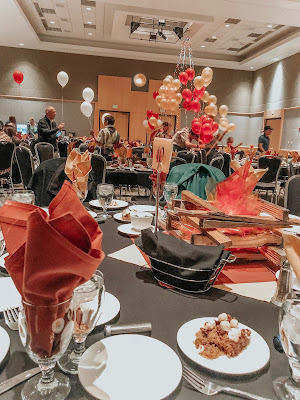 Saturday we arrived at the event, and immediately grabbed a beverage before perusing the auction items.  We started placing bids, and immediately Dewy's palms started sweating.  You see... Dewy is, as I mentioned before, a saver.  Like, he even saves his birthday money.  I am grateful for this characteristic, because if it were up to me we would have no money and terrible credit.  My parents tried to teach me, I swear.  Sorry mom.  The only reason we have anything to our name is because Dewy is religious in his saving abilities.  While Dewy is a saver, he is also ridiculously competitive. When we were first married, we used to play Phase 10 before bed.  I'm a known cheater when it comes to games, and Dewy would be livid when he caught me cheating.  This ensured a fight, which then required us to read our scriptures so we settled down and were friends again.  To each their own, right? This combination of needing to not spend money, but also to win everything, is a bit of a struggle during a silent auction.  I spend the night watching for Dewy to spontaneously burst into flame or something.  You can see every time he gets outbid on something that he is first relieved that he doesn't have to pay for something, but then almost immediately upset because he is losing.  This lasts for about two hours, and then the auction ends and his buyers remorse sets in.  I on the other hand am full, hydrated, and proud as punch of my new three pot crock pot.  Saturday our spoils included numerous items, one of which was a gun.  I'm clearly an outdoors woman, and know exactly what kind of gun he got.  Don't even ask me.  I'll tell you it's big, and it's black. 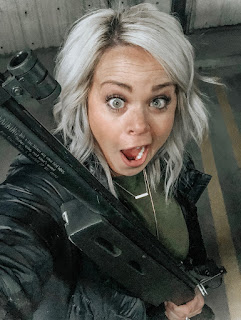 While we gathered up the winnings, Dewy left me with everything while he went in search of the final item.  I stood there, like a weirdo, hovering over a pile of stuff, holding a giant gun like I was standing guard.  I saw the concerned citizens walking by judging me.  Look, it's obviously not loaded, and even if it were I don't even know how to hold it.  I think you're fine.  One guy looked me up and down and said, "I'm following you to the parking lot." He was obviously the most intelligent man in the hall.  The moral of the story is that we still can't be trusted at silent auctions, even after four years, but we do enjoy a night to get all dressed up.  Also, Mr. Hodges kicks butt at his job.  The end.