elf on the shelf. 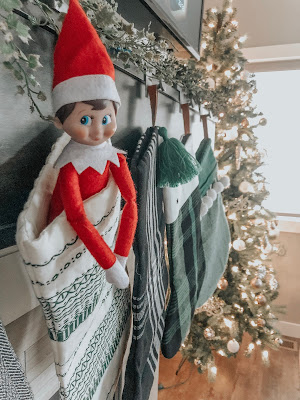 When I first heard of the elf on the shelf idea, I thought it was the worst possible thing I could think of to do as a mom.  If I were to give in to those antics, I was to be committed to moving that dumb doll around for the entire month of December.  And then what? A leprechaun  for St. Patrick's Day? A Mayflower for Columbus Day? Oh, excuse me... Indigenous People Day.  Where does it end?

Sending your kids to school is a surefire way to be outed as the worst parent in town.  The kids all talk to your kid about their traditions and goings-on, and your kid comes home and wonders why you don't decorate your table for Halloween like Carson's mom.  Because, Rhett... Halloween is stupid, and I pride myself on being the meanest mom in the neighborhood.  When he came home asking why Santa sent his friends an elf but not him, I knew it was only a matter of time before I caved.  I was sure, however, that I was not going to follow the ridiculous actions of all the other elves.  I had a houseful of psychos... I didn't need to egg it on by adding in a mischievous little demon in a red pointy hat who encourages squeezing the toothpaste all over the counter.  That is when I got the idea for our elf. 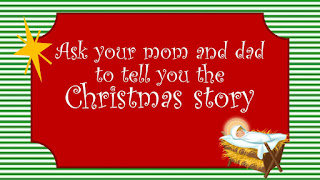 Meet Mr. Elf.  We are all about being original over here.  Mr. Elf understands that parenting is a juggling act, and that much like the rest of life, I spend the Christmas season trying to find the balance between magic, make believe, scaring my children into behaving with threats of calls up north, and the real meaning of Christmas which is the birth of the Savior.  I want so badly to be able to focus on the nativity story, but constantly find myself referring to Santa Claus instead of Jesus Christ.

"If you hit your brother, Santa will put you on the naughty list!"

"Not eating your dinner, huh? Santa will be thrilled to know that..."

Like Santa holds more merit than the Savior does? Pull it together, Amber.  Then, I got an idea.  An awful idea... this mom got a wonderful, awful idea.  Ok, it wasn't awful.  It was actually insanely genius.  Each morning when Mr. Elf finds a new place to hang out for the day, he presents the Hodges family with a card.  That card holds some kind of a request from Mr. Elf.  Sometimes it is an act of service--make dinner for a neighbor, donate food, leave candy canes on cars in Walmart's parking lot--, and sometimes it is a family activity--decorate sugar cookies for each other, tell each member of the family something they do well, read the story of Christ's birth from the scriptures, etc.  The boys are PUMPED about locating Mr. Elf, but even more excited about finding out what they have to do that day.

This tradition has been going for about 4 years, and it has been such a simple way to incorporate acts of service, kindness, and the spirit of Christmas into our season.  I created the cards, laminated them, and I reuse them every year.  I also made sure to make way more options then I would need so I have things to pick from depending on my mood.  I'm happy to share the file with anyone interested as well. Occasionally, when I'm feeling super adventurous, Mr. Elf leaves a handwritten note with the card congratulating the boys on a job well done, or threatening disappointment in their actions if they fail to complete a task.  It's a little upsetting seeing how much credibility a creepy little elf holds over my threats and glaring gaze, but whatever.  It's not like I was sliced open to give you life or anything.  You do you, kids.  You do you.

Also, when all else fails, the app "message from santa" works like a dream.  You're welcome!