do what you love.

January 16, 2019
My entire working life I have followed the same track record--work for a company for four years, then move on.  I was nervous about starting a "career" where quitting after four years was frowned upon.  Over the course of my nine years of teaching, I have changed my specific job a handful of times--cheer coach, student government advisor, 8th grade English, 9th grade English, honors English. Those changes and the ever rotating clientele kept everything surprising and fun.  This year, however, I'm doing something I've never done before.  And when I started, I was nervous as all get out.

I was made aware of a job opportunity in the fall.  It sounded exciting and challenging, and after talking it over with Mr. Hodges, I decided to apply.  They hired me, obviously... cause who wouldn't?...and it has been baptism by fire.  The job title wasn't entirely clear, as the position is completely new.  My first task was attending a meeting along with the 11 other people who were also hired to the team.  It became clear early on that most of these people already knew each other from other teams around the district.  I felt a little like a fish out of water, but wanted badly to take it all in and become an asset.  These people were impressive, and smart, and fun, and my excitement continued to build. 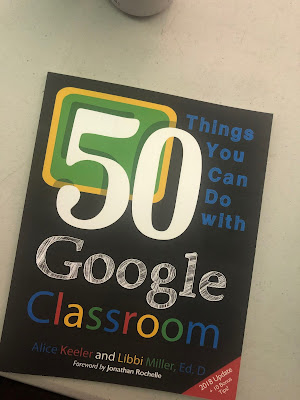 About a month and a half later, our team went on a training excursion.  We had the enormous opportunity to see other school districts, and how they were implementing technology in their own ways.  I watched as students collaborated together, created projects, and one of the coolest things I saw was a classroom of students in a STEM lab creating their own parkor shoe design to submit to NIKE.  You read that right, people--NIKE.  I was a little taken aback when we walked in to the district office and the head secretary asked if we were with "OODUH."  After we all kind of looked at each other in confusion, I said "Utah?" and she said "Oh is that it?" Yikes. I can't make this stuff up, you guys.   However, the rest of the district was impressive.

We were able to tour Apple park and see what Apple technology had to offer education.  We saw Apple products geared specifically for teachers to implement in the classroom, and experienced the feel of the "Apple way" of doing things.  Apple Park looks a lot like any Apple store you walk in to.  It is minimalistic, clean, white, and modern.  It feels expensive, and slightly snooty.  It's quiet and clean, and very high end.  We then were able to sit down at Google and hash out exactly what we thought road blocks were going to be for our team and how we were going to hurdle them. We worked as a team to come up with goals and solutions, and compared our morning experience with the "Google way" of doing things.  Google was energetic, and colorful, and chill--a very obvious opposite from Apple.  We shot pool while we brainstormed.  We discussed goals using sticky notes and crappy pens, but no one felt slighted or unimpressed--it was actually the opposite.  Both locations were successful at their goals of reaching the consumer.  Both went about their goals in very different ways.  Both got the 12 of us excited. 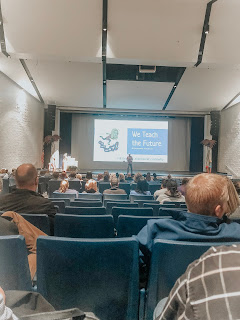 As new Integration Specialist Mentors, we had received excellent tech training and formed professional relationships as a team that would help forward our district.  We worked our tails off, and at the end of it we were exhausted, but we were so excited to get started in this new role.  Since then, we have had numerous opportunities to work together as a whole team and in smaller groups.  Last Friday we were back at it, and I observed a handful of things during that day of presentations. 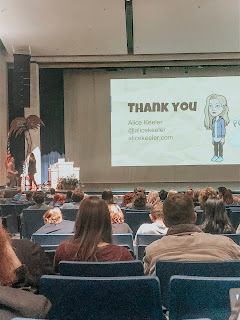 I am a firm believer in the idea that the energy you put out into the universe will always come back to you.  I have been a teacher for a long time, and over the course of that time I have been surrounded by many of the same people.  We get small changes each year, but the majority of the people I work with have been there since I was hired.  Every day I go to work, and I enjoy what I do.  I adore my students.  Honest truth--as smelly and obnoxious as they can be, I genuinely love them.  In fact, Friday night we watched our local high school rivalry basketball game, and Mr. Hodges kept saying, "Why are you grinning like that? You're like...beaming...What is your deal?" and the fact of the matter is that they are my kids.  Those students I had in years past are still my kids, and I adore them all.  I will also be honest and say that I cannot exude those same sentiments to all the adults I work with.  I really don't love all of them.  Some people are hard.  And some are even worse.  I am professional with all of them, and I get along fine with them.  However, most days I feel like if I could go to work and not deal with anyone over the age of 15, I wouldn't be mad about it.  And this year has been...more difficult, let's say...than previous years.  Teachers are people too, and sometimes personalities don't mesh.  It's life.  Let's move on.

What was I saying? Oh, right... energy comes back to us.  Too often, I witness teachers pushing back against the "new" idea being presented.  Teachers, along with a lot of other people, get set in their ways and are unwilling to change those.  Buy-in is always the hardest part of new ideas.  The way they do it has been just fine up until now, so why fix what isn't broken, right? I am constantly leaving meetings feeling frustrated with the negative energy flowing rampant through the building.  Switch gears to my new team of 12.  These are people who do the same thing as I do.  They do the same thing as everyone in my building.  They are teachers, educators, coaches, adults, parents, human beings.  But they have one very different trait than most of those I rub shoulders with every day--not all, but most.   They are EXCITED.  These people are open minded, enthusiastic, happy.  And you know what? They make me that same way when I might not be in the mood to be. 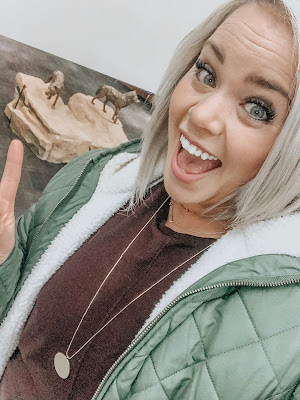 I lost count of how many times last Friday I text Mr. Hodges and said, "I freaking love everything about this.  I want to do this every day." I want to be surrounded by that energy everyday.  What a difference it makes to surround yourself with people who have positive energy.  People who don't look for things to complain about.  People who love what they are doing, and want everyone to see how awesome it is.  They don't just say they love it, they genuinely could spend 24 hours a day doing it and not get enough.  They aren't proud, but want to see everyone around them succeed.  There is so much difference in how I feel after leaving a faculty meeting versus how I feel when I leave an ISM meeting.  There are indivduals at the junior high that I adore.  There are professionals who hunker down in the trenches and bust their butts.  And there are some people that have given up and just need to quit.  My conclusion is this: Do what you love.  And do it well.  Otherwise, don't do it at all.